Here is a Halloween inspired Soundscape for you:

Posted by Simon Stockhausen at 11:11 AM No comments:

The concert last Saturday was a great success. The premiere of my piece Doktrin der Ruhe was performed really well by the orchestra, they played it expressivley and full of dedication, some of the more difficult parts were a bit off, but I can live with that.

In the last part of the concert named "Felder" (fields) my brother Markus and I experimented with improvising together with the orchestra, we had written out 4 smaller composed "Felder" and in between my brother conducted the impro using dedicated hand signs for various textural things. I processed the orchestral sounds with various Plug-Ins and the electronic sounds were flying through the  hall adding a surreal element to all of this.

Then in the end my brother and I took over the impro and improvised together (me sitting at the mixing desk in the hall with my keyboards) which we hadn't done for almost 10 years, and at some points he brought the orchestra back into the impro.

The audience was amazed by all of this and the final applause was enthusiastic, warm and quite long.

Posted by Simon Stockhausen at 9:50 AM No comments:

This is a waggon full of technical equipment we need for the quadrophonic amplification of the live-electronics, which process the sounds of the orchestra. They just roll it into the hall, connect the cables, setup the Mixer, install the speakers and we're ready to go - the only solution if you don't have the time to setup things in a normal manner due to the overbooking of the only concert hall in Hamburg: 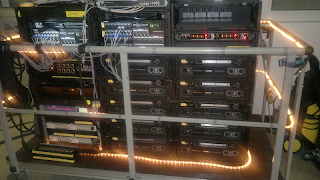 71 musicians and a conductor (Jules Buckley) on one stage during the first rehearsal of my orchestral piece Doktrin der Ruhe (Doctrine of Calmness): 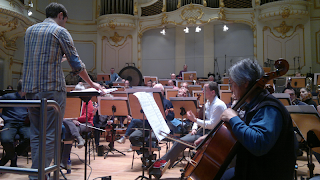 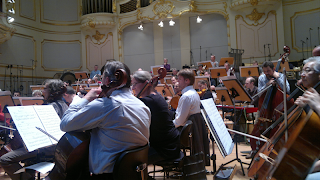 The rehearsals for the big concert next Saturday in Hamburg with the Hamburger Symphoniker orchestra have started, this afternoon we will rehearse my orchestral piece Doktrin der Ruhe for the first time and I'm pretty excited about that. I will try to take some photos during the afternoon and post them here.
Posted by Simon Stockhausen at 10:19 AM No comments: